Winners of the Tolosa Choral Contest 2016

Presented the 49th edition of the Tolosa Coral Contest 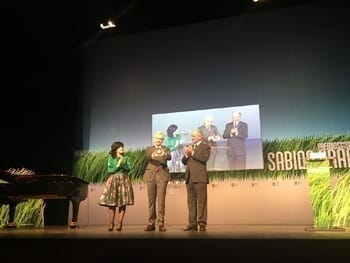 On Sunday, the prize for the Initiatives Center of Tolosa – CIT – was awarded. It has been granted “for its contribution over the course of 50 years to irradiate the Basque culture and to make Tolosa a focus and a meeting point of the cultural diversity of the world”. It has been collected by the President of the CIT, Julián Lacunza.

Motor and promoter of the cultural life of the town and its region, the international vocation of the CIT has allowed to place Tolosa, according to Sabino Arana Fundazioa, “on the map of culture of the world”, for its promotion of recognized international initiatives, among them the International Choral Contest, the International Puppet Festival – Titirijai and TOPIC, the Tolosa Puppet International Center”.

They also stressed that “CIT has also developed its own model that combines the knowledge of howto do, the organizational capacity and commitment, and a model based on the active, unconditional and supportive participation of the cityzens of Tolosa in the activities of the Center”.

The Tolosa Choral Festival is suspended