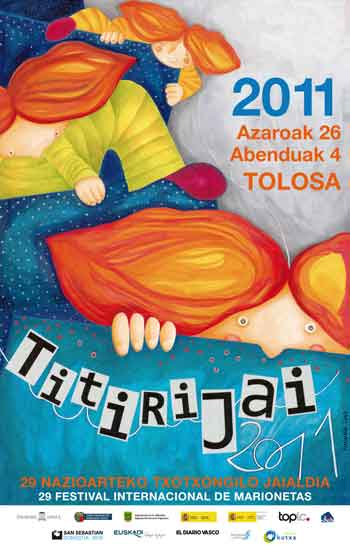 Titirijai will hold the 29th edition of the festival from the 26th of November until the 4th of December. Twenty-two companies from seven foreign countries – Argentina, Austria, Belgium, France, Mexico and Switzerland- as well as seven Spanish regions –Andalusia, Asturias, Castilla-Leon, Catalonia, Basque Country, Balearic Islands and Madrid- will take part in this edition.

This year we will be dedicating the so-called “Window to” festival section to Swiss Puppetry and the exhibition at the Aranburu Palace will offer a wide and detailed collection of puppets from Switzerland.

This year’s edition is marked by the severe crisis we are suffering and the effect this is having on every aspect of our daily life. And so this is the third year we are having to squeeze our budget in order to meet our audience’s expectations, especially the younger audience which thrives on the puppets’ magic.

Students from fifty schools will be attending Titirijai

Around 50 schools and ikastolas from 23 towns have registered to participate in this year’s edition, which confirms our belief that teachers find it beneficial for students to approach the world of theatre through the puppets. Bearing in mind that in addition to this towns like Eibar, Elgoibar, Ibarra, Ordizia, Pasaia and Sestao are part of Titirijai tour circuit, we can have an idea of how important the festival has become in the autumn cultural calendar in Guipuzcoa.

This year we will have around twenty-one companies from six foreign countries and seven Spanish regions featuring a total of eighty-four shows. As usual we have tried to prioritize quality and we have made a selection of the best shows touring around at present produced by smaller companies than previous editions in order to meet our budget.

This year the festival focuses on Europe. Given that the “Window to” festival section was dedicated to Switzerland we thought of complementing the offer with companies from surrounding countries such as Austria, Belgium, Bulgaria and France. We can therefore conclude that we have a clearly European festival this year and modernity features as the prevailing theme in both style and technique.

Apart from the usual program for the 9 days of the festival, this year we proudly announce the worldwide premier of two shows TOPIC is coproducing. Firstly, we will be able to attend the premier of Iberescena’s play “Pepo ¿Adónde vas?” featured by Buenos Aires Puppets, from Argentina, Seña y Verbo, from Mexico, and La Canela, from Andalucía on November the 19th. The second premier will be on December the 6th, right after the festival; the name of the play is “Adiós Bienvenida”, a Mimaia company’s project, and is the result of a period of residency at TOPIC.

We wish everyone visiting Tolosa a nice stay during the festival and hope you enjoy the town’s urban charm, markets, food… and its puppets.
WELCOME!